Imagine a small country with an incredible wide variety of fantastic landscapes ranging from steppes through lakes & marshes till beautiful valleys up to impressive mountain ranges covered with carpets of millions of stunning wildflowers. What is more this area is full with superb bird-watching possibilities, including many rarities and even local endemic species ranging from Caucasian Chiffchaff, Güldenstadt's Redstart and Great Rosefinch till Caucasian Black Grouse and Caucasian Snowcock. Despite the fact that the Greater Caucasus is much higher than the European Alps with a good timing and careful selection of visited areas we always search and find birds without strenuous hikes.

Ask for the actual price.
Our price includes:

After landing at the Tbilisi Airport we drive North to the majestic mountains of the Greater Cacasus. We aim the little mountain town of Kazbegi nestled in the beautiful Tergi Valley, where we will stay for 3 nights. Along the way we shall stop at some lakes to look for a variety of wetland birds including White-winged Black and Gull-billed Terns. As we reach the foothills we’ll stop again to explore some of the oak and beech woods cloak the lower slopes, where we should find Green Warbler, Red-breasted Flycatcher and perhaps Semi-collared Flycatcher.

On one day we walk and bird watching around Kazbegi where we will encounter our first mountain birds such as White-winged Snowfinch, penicillata race of Shore Lark or tame flocks of Twite. Generally we can find them just alongside the road, feeding, so everybody should have excellent photographic opportunities. We should also start to see our first raptors such as Griffon Vulture, Peregrine Falcon and the mighty Lammergeier. Levant Sparrowhawk is also regularly seen here. But as we start our climb on the slopes we all have to listen carefully to hear the eerie call of the male Caucasian Snowcock. Once we start to hear this fascinating, echoing sound in the mountains it will guide us to find the birds relatively easily on the slopes.

On another day we drive up and later on walk towards Sameba Temple which is about 2200m above sea level with a panoramic view.  But we will concentrate on a careful scanning of the high alpine meadows which should reward us with a good view of the dark phase of Caucasian Black Grouse. At rocky parts we should find some other stunning birds such as Guldenstadt’s Redstart and Great Rosefinch. But there are many more to discover, so we will check the bushy areas alongside the mountain streams and rivers in the valley for Mountain Chiffchaff and Green Warbler, plus a great selection of several different migrants, including European Bee-eater, Red-backed and Lesser Grey Shrikes, Red-throated Pipit, Yellow Wagtail and Ortolan Bunting, just to mention a few.

After a morning birding we travel to the Iori Upland at the far East corner of Georgia. This is the area where our next base will be at Chachuna Nature Reserve about a 300 kms away, where we will stay at the nature reserve’s cottages. Landscapes and habitats are quite different here with Asiatic steppes, arid woodlands and even semi-deserts. It is a fantastic area for a wide range of wildlife. Plenty of glacial relict and endemic plant species, huge variety of insects in waste numbers, good number of different mammals, but for us the most important, eye-catching thing will be the abundance of raptors, so we should stop on the way regularly to check them out. Chachuna is well known for having one of the largest communities of breeding birds in the Caucasus. Breeding raptors include Long–legged Buzzard, Lesser & Common Kestrels, Black Kite, Egyptian, Cinereous & Eurasian Griffon Vultures, Levant & Eurasian Sparrowhawks, Northern Goshawk, European Honey–Buzzard, Common Buzzard, Eurasian Hobby and Lanner Falcon. Eagles are represented by Imperial, Lesser-spotted and Short–toed Snake Eagles.

The riparian forests and grasslands of Chachuna Nature Reserve provide excellent habitats for Black Francolin and Chukar. There are a few pairs of Black Storks as well. Large groups of European Bee–eaters, European Rollers and Eurasian Hoopoes regularly raise their young in cliffs, steep banks and tree holes later during the year. The stunning list of passerines to be found at the site includes Calandra Lark, White-winged Lark, Crag Martin, Rufus–tailed Scrub Robin and many more.

We will also visit different canyons where usually we find some more attractive birds such as White-throated Robin, Finch’s Wheatear, Red-tailed Wheatear, Blue Rock Thrush, Rock Nuthatch, Lesser Grey & Woodchat Shrikes, Rock Sparrow, Black– headed and Ortolan Buntings. If that is not enough we might colour the list with Rose–coloured Starling and various species of Warblers, plus add some waterbirds at the Dali Reservoir which is home of good numbers of Ruddy Shelducks for example.

Today we visit Davit Gareji which is about a 160-kms-long drive from Chachuna. This is one of the most spectacular sites in Georgia, where historical and wildlife attractions are located side-by-side and can be watched at the same time. Nature & Culture – all in one! Mediterranean-type arid badland landscape with multi-colored clay hills covered with shrub and steppe-like vegetation which is the site of one of the oldest Christian monasteries in the World as well.

But for us perhaps the most important thing will be the Davit Gareji helds breeding colonies of Eurasian Griffon & Egyptian Vultures, Imperial Eagles and Chukar during early Spring. Later on –May-June- Rollers, Hoopoes, Blue Rock Thrushes, Bee-eaters and Rose-coloured Starlings feed their chicks all around. It is also a very good raptor area, so we will have a second chance for any of the missed species below, such as Long-legged Buzzard, Common Kestrel, Cinereous Vulture, Eurasian Sparrowhawk, Short-toed Snake Eagle or Saker Falcon.

Passerines should be around in good numbers, but species depend on the timing of our visit:
we have a second chance for Finch’s Wheatear, Rock Nuthatch, Lesser Grey & Woodchat Shrikes, Rock Sparrow, Black– headed and Ortolan Buntings. It is also a good place for Calandra Lark, Crag Martin, Rufous-tailed Scrub Robin, Isabelline Wheatear, Pied Wheatear, Willow Warbler, Orphean warbler, Lesser Whitethroat and Spanish Sparrow.

Departure from Tbilisi, travel home. OR

Javakheti Plain is a mountain grassland area in southern Georgia, along the border with Armenia and Turkey. It is about a 250-kms-long drive from the capital city of Tbilisi, so we will have a couple of birding stops on the way. There are several lakes which support breeding populations of many bird species. These sites give us great opportunity to enjoy observing Velvet Scooter, Ruddy Shelduck, Ferruginous Duck and many other duck species. Also during the spring migration there is a big chance to see White-headed Duck, White-tailed Plover and Sociable Plover.

Those who are eager to climb up the volcanic mountain of Javakheti should be rewarded with a good chance to see Crimson–winged Finch and Radde’s Accentor.

Finally we drive back to the airport toward Tbilisi, birding en route stopping at Vardzia caves area. Vardzia is a famous cave complex in southern Georgia, in the upper part of the River Mtkvari in the Kura Valley, close to the border with Turkey. The area has a number of typical East–Mediterranean species. Most remarkable are vultures and several species of reptiles. It is possible to observe Griffon, Egyptian and Bearded Vultures and larger raptors will be represented by Golden Eagle, Short–toed Snake Eagle and Long–legged Buzzard. Other quite commonly seen birds of prey are Levant Sparrowhawk and Peregrine Falcon. In the surrounding area Chukars are relatively common as well. Other birds which can be found are Crag Martin, Black–eared Wheatear, Blue Rock Thrush, Orphean Warbler, Lesser Whitethroat, Rock Nuthatch, Lesser Grey Shrike, Rose–coloured Starling, Rock Sparrow, Black–headed and Ortolan Buntings and other songbirds typical for semiarid landscapes. European Bee–eaters and Hoopoes are other common birds of the area. 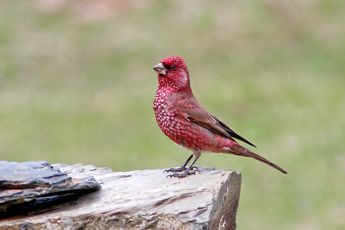 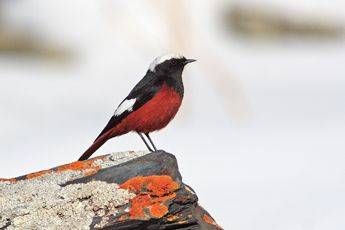