Lake Kerkini in northernmost Greece is one of Europe´s prominent wintering areas for birds. There are a few places in Eastern Europe where birds overwinter in such large numbers. When snow covers most of the Continent and severe frosts arrive Lake Kerkini becomes one of the chief wintering waters of the East where birds can still find plenty of food.

Some birds have a reputation of regular Winter visitors to the area. Dalmatian Pelicans are special not only because of their presence and numbers reaching almost 1000 individuals but they also wear full breeding plumage in late winter and when fed by local fishermen you can approach them to a few feet.

Another speciality are several Greater Spotted Eagles that regularly winter at Kerkini. There will be though other raptors to look at like Golden, Imperial and White-tailed Eagle, Goshawk, Peregrine, and possibly Saker Falcon. Myriad water birds are found in the lake like Greater Flamingos, waterfowl (Ferruginous and White-headed Ducks are possible), egrets and cormorants. A few waders could be present too. Lesser White-fronted Geese are regular among more numerous White-fronts and numbers vary between 20 and 70.

Come & join us for a relaxing holiday to find premature Spring in wonderful Northern Greece.

5 days in Greece
relaxing holiday with 1 base
best during January and February
start and finish in Thessaloniki, Greece
Highlights

around 1000 of Greater Flamingos and same amount of Dalmatian Pelicans,

one base during the holiday at Chrysochorafa

http://www.ecotours-worldwide.com/dates-prices
Ask for the actual price.

Birding extension at the coast West of Thessaloniki

Flights from UK seem to land either early or late in the day at Thessaloniki airport. We will then transfer to Chrysochorafa, our base for the rest of the holiday.

Renowned as one of the finest wetland sites in Europe, lake Kerkini attracts a few dozens of thousands of water birds each winter. During winter masses of waterfowl take the advantage of spending the elsewhere harsh cold months in a gentle and rich in food environment.

The lake was built in 1932 by damming of Strymonas river that flows in from the northern Bulgarian mountains. The main purpose was to hold and collect spring waters to prevent flooding and to use it for irrigation of local fields in Spring. The water surface thus changes greatly from 54 km2 in the winter to 72 km2 in spring. Mountain range called Kerkini or Belles rises to 2031 meters just above the sea as a natural border between Bulgaria and Greece.

Highlights of the lake are in mid winter thousand of Greater Flamingos, hundreds to thousand of Dalmatian Pelicans, a few Greater Spotted Eagles, White-tailed Eagles, small flocks of Lesser White-fronted Geese and Pygmy Cormorant and up to 40000 of other water birds, especially wildfowl, Cormorants and herons.

We will have to check the skies, Golden and Greater Spotted Eagles are regularly spotted. One of the half a dozen wintering of the latter is often seen flying over the lake. Saker and Peregrine Falcons, if present, regularly attempt to take their prey from the water surface. Griffon Vulture is also registered regularly, especially over the mountain sides.

Flocks of hundreds of Pochards, Great Crested Grebe, Teal, Shoveler, Wigeons, Pintail and Shelduck should be present alongside with Avocets and they frequently hide a treat like Red-crested Pochard, Ferruginous or White-headed Duck. Interestingly, people often get quickly used to thousand or so Greater Flamingoes and Dalmatian Pelicans. Pelicans follow fishermen or Cormorants every day as they are somewhat lazy to catch fish themselves. You can watch them amazingly close in their full breeding plumage, trully an unforgettable picture that will stay in your memory for long.

White-tailed Eagles are round the lake too and they could be already breeding by the time of our visit. Largish flocks of Greater White-fronted Geese (around 1000) always hide a few Lesser White-fronts which is a real target for us. It has been declining over the past two decades and numbers vary at Kerkini between 15 to 70 individuals. We will look for them both on the water and in the fields where they feed in the daytime. They could be difficult to track down and their more rapid manner of movement often helps us to pick them out of the bigger flock of other geese rather than their smaller size.

Bewick´s and Whooper Swan, Greylag Goose and Common Crane are typically found in small numbers on the lake.

Small flock of Pygmy Cormorants is round all winter as well as a few Black Storks. Great Egret and Grey Heron are numerous and seen from almost every vantage point overlooking the lake.

Black Kite, Imperial Eagle, Black-crowned Night Heron, Spoonbill and Glossy Ibis, Brent Goose and Ruddy Shelduck are rather irregular visitors this time of the year although there is always a chance to find one or more of these around the lake.

Away from the lake there will be a few other birds to look for. Winter guests from the north usually include some Merlins, Hen and Marsh Harriers and couple of Northern Grey Shrikes.

Sedentary Little Owl can be perched on a pole or building and Eagle Owl is sometimes seen hiding itself in a clupm of trees while Syrian Woodpecker is common in villages.

We will go up to the mountains one day looking for the birds in very well preserved beech and maple forests. Since they do not hold their territories it will be a trial to see some of the attractive species occuring there like Hawfinch, Sombre Tit, Black, Grey-headed and Middle-spotted Woodpecker, Alpine Accentor, Goshawk or Nutcracker.

White-backed Woodpecker (lilfordii), Rock Partridge and a Wallcreeper would be too lucky finds for us although they both occur in the area.

There is always a chance to encounter an unexpected bird, either a vagrant or one lingering here instead of being far to the south. For instance, 2 Little Bustards stayed almost all winter in 2012.

We will drive back towards the airport. Should we have time left before checking in we will visit Angelochori lagoon near the airport. 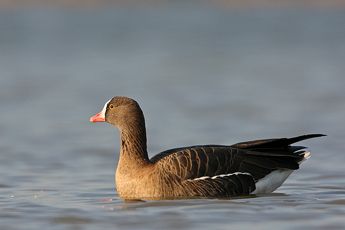 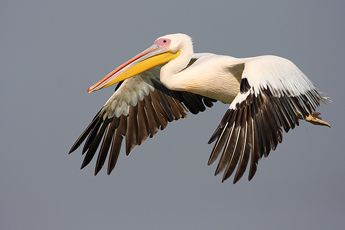