Macedonia is quite unknown and it is one of the most fascinating Balkan countries. The country is ready to invite visitors and still has traditionally managed landscape full of birds. The history dates back to thousand years, Macedonian dynasties and Illyrian towns.

Macedonia sometimes referred as "The Pearl of the Balkans", has breathtaking landscape with vast areas grazed by flocks of sheep and countryside full of scenic mountains. Birds are plentiful and not too shy.

We will focus on raptors and passerines that include Levant Sparrowhawk, Long-legged Buzzard, Eastern Imperial Eagle and Lanner, Masked Shrike, Wallcreeper, Orphean Warbler and Rock Thrush.

To compensate the lack of watery habitats in Macedonia we will stay at Lake Prespa , but on its Greek side that offers better possibilities of accommodation and also better access to birds.

White and Dalmatian Pelicans will be one of the best species there, but there are a number of other species to look for as well.

We will be accompanied by different local guides who know where raptors breed.

Come to watch one of the best raptor watching in Europe, fantastic pelican show at Lake Prespa and great selection of Mediterranean specialities.

from late April, May, till early June;

We fly from the UK to Thessaloniki, Greece and transfer to Kavadarci, the centre of the best known wine area in Central Macedonia. Depending on the traffic the drive should be about three hours.

We will have to make an early start to arrive at the vulture conservation area in time. The morning gathering of raptors and the sun behind us means that this is the best time of the day to observe up to a dozen Griffon Vultures and a few Egyptian Vultures. The feeding place also attracts other raptors and we will especially hope to see Lesser Spotted Eagle. A Wolf comes sometimes to grab a meal for its cubs.

We will look out for raptors all day as we travel along the Tikvesh lake, passing by a few villages before we get to Bosavica gorge. Golden Eagle and Short-toed Eagle, Long Legged Buzzard and Levant Sparrowhawk are all breeding in the area. We should spot a dozen Woodchat Shrikes, a few Hoopoes, buntings and warblers.

Our hotel is found at the outskirts of a small town and we can take a brief walk before breakfast every day. Birds likely to be seen are Hobby, Corn Bunting, Golden Oriole, Syrian Woodpecker or Red-backed Shrike and Cirl Bunting in the town park.

In the morning, we will drive towards the Vardar river and hope to observe an Eastern Imperial Eagle at eye level on an electricity pylon where it breeds. Peregrine Falcons also sometimes nest nearby.

At the same place, the Calandra Larks sing in flight. The top of a small hill is also a fabulous vantage point providing panoramic views. Here you will see an archetype of European farmland with dozens of vineyards, solitary trees, and many small grasslands scattered amidst fields of various sizes. The wider environs are a good place to watch Bee-eater, Lesser Grey Shrike, Short-toed and Crested Lark. Roller and Lanner Falcon regularly breed a few miles from here.

Later we move on to the driest area of Macedonia with annual precipitation of less than 10 inches. The terrain is flat hills dissected by broad valleys created by temporary water courses that are already dried by this time of the year, but still inhabited by Little Ringed Plovers.

Many species of interesting insects can be seen here including a number of Mediterranean butterflies like Little Tiger Blue or Delattin´s Grayling.

In the late afternoon, we visit a village with a large Lesser Kestrel colony amounting to 120 - 150 pairs.

Tikvesh Lake is an artificial lake stretching over 17 miles and surrounded by mountains. It was created on the River Crna (Black River). The lake valley is very picturesque with steep limestone slopes, a number of caves and tranquil bays. We'll cruise the lake on a flat boat ideal for birdwatching. Birdlife used to be busy here and we will watch it both from the deck and also stop at a 13th century orthodox monastery where we will have a longer break.

There is a Griffon Vulture colony on a cliff that has increased in numbers recently. We may also spot nests of Long-legged Buzzard, Short-toed or Golden Eagle. Black Stork often soar high over the valley while lower levels are reserved for Alpine Swifts and Red-rumped Swallows that will be busy feeding their young. The slopes can hide Cirl and Rock Bunting, Rock Partridge or a Subalpine Warbler and Levant Sparrowhawk sometimes flies over our heads.

We can also try to locate an Eagle Owl perched at one of its favourite outposts.

We leave Kavadarci after breakfast and take a two hour drive to the Mariovo area which is inhabited by a large and easily accessible Griffon Vulture colony. Our main goal will be areas close to the road where we will spend rest of the day.

Volcanic rocks are interspersed with limestone and together with scattered fields, old orchards and winding rivers provide a fascinating habitat of many interesting birds. Rock Thrushes and Black-eared Wheatears are common. Besides vultures, Golden Eagle and Peregrine there are Booted Eagles, Rock Partridges, shrikes, Bee-eaters, Woodlark, Ortolan and Rock Bunting, Sombre Tit and possibly Rock Sparrow in the area that we will explore.

This is simply another great place to watch butterflies. About 50 species should be present on a sunny May day including the rather localized Eastern Greenish and Gruner´s Orange Tip or Krueper´s White.

A typical and still inhabited old Macedonian village is found where the road ends. There we turn back and drive to Prilep.

We drive across the border to Greece. We will pass Bitola, a town with a medieval centre that dates back to the times of Ottoman rule over the Balkans. Just outside Bitola there are ruins of a much older settlement, Heraclea Lyncensis. It was founded by Philip II, father of Alexander The Great and was damaged by an earthquake in 6th century.

We will take a brief look and perhaps watch a wheatear or Blue Rock Thrush before we get to some nearby fishponds. Here we take a longer break while watching birds like Black-winged Stilt, Little Egret, Little Bittern, Penduline Tit or Cetti´s Warbler. We should keep an eye open for a Masked Shrike along the road.

We arrive at Prespa lakes with hopefully some time for birdwatching before dinner.

The impression a first-time visitor gets from Prespa is of a remote, isolated place, lost in the mountains, but Prespa is found right in the heart of the Balkans and today is shared by three countries, Albania, Greece and Macedonia.

A rich natural environment and evocative landscape, the birds, the traditional villages and the remarkable Byzantine monuments are Prespa's best features. In Prespa the variety of habitats and life-forms make up a complex mosaic of nature: from the lakes and the wet meadows to the forests of oak and beech and the alpine meadows of the mountains. The two lakes (Small and Large Prespa) are among the oldest in Europe and lie at an altitude of 2550 feet while several nearby peaks exceed 6000 feet.

The lake island of Golem Grad is home to the world´s largest breeding colony of Dalmatian Pelicans, with around 1000 - 1200 pairs. White Pelican is found there too, though in dozens of pairs only.

During our full day in the area we will also look for the Goosander, Pygmy Cormorant, Little Bittern, Purple, Squacco and Night Heron, Glossy Ibis, Black-winged Stilt, Whiskered Tern, Ferruginous Duck, Penduline and Bearded Tit and Moustached Warbler. Little Crake keeps itself concealed and we will only spot one with luck. Lake cliffs host Alpine Swifts, Rock Nuthatches and Crag Martins and Swallows of the East Mediterranean subspecies transitiva with orange belly breed in the villages. Off the lakeshore our attention will be drawn by passerines and we will hope to see Subalpine Warbler and Sombre Tit on slopes over the village where our hotel is located. Dipper and Grey Wagtail can be seen along the nearby stream. Time permits we will go to higher elevations to look for Alpine Accentor, Water Pipit and Bonelli´s Warbler.

On evenings we could be accompanied by the whistles of Scops Owl or chirping of a Nightjar.

Some brief birdwatching around our hotel in the early morning to say farewell to the splendid wildlife in this forgotten corner of Europe. We will drive for about three hours to Thessaloniki airport for our return flight. 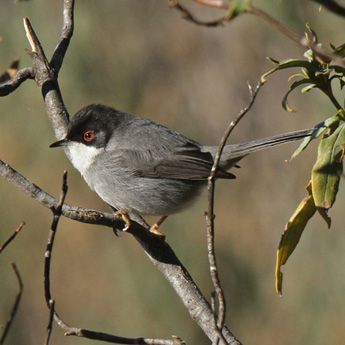